Today, we have an awesome entry from Senior College Experience Student Emily Dawson 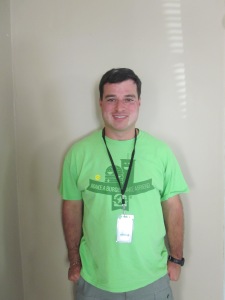 ed a beautifully written essay on her experiences as a College Experience student and special education student in high school. She attributes a lot of her own insight and confidence today to our very own Jesse Saperstein, a College Experience instructor and disabilities advocate:

Being “Special”, by Emily Dawson:

In my senior year at CEP, I have one class that puts my brain to work and makes me think. It is the class I love to go to because not only do I love to write, the teacher is amazing. On the outside, he seems like any other teacher; he’s actually more special than any other teacher I’ve had in school. His name is Jesse and he has Autism.

Jesse has a real impact on me and my life. I met Jesse during summer school this year on a Wednesday, we were going hiking. That was actually not the first time I met Jesse. He came to CEP one day in the summer and made a speech about his life and his experiences in school. Ever since I heard him speak, he was a shining star to me! Jesse talks about how anyone can achieve what they put their mind to regardless of their disability. I believe in that so much now after meeting Jesse. He’s an author, advocate and a teacher even teaching in a college.

Many people believe that others with disabilities can’t do particular things because of their disability. Jesse isn’t like that at all, Jesse reaches and strives for his goals that are hard and may seem impossible. He makes it look easy when it really isn’t but he doesn’t brag about how hard he worked to get to where he is now. He only offers great advice. I want to meet my goals just like him. I want to let people know that you’re more than what people see or assume you to be like when they think of a person with a disability. Six years ago, I thought I would never be what I thought was “normal” or that I’d have a normal life.

When I was in high school, I was in special education classes. There were some very nice kids in those classes but I wanted to be with the kids who I thought were “normal. I didn’t really make much of an effort to get to know the other special ed. students as well as I should have and I know that now. I didn’t want to spend my day with a small group of students who looked very disabled moving from class to class together with aides. I wanted so much to be what I thought was “normal” so I isolated myself from the special ed. kids thinking that if I acted like I wasn’t special ed. the popular girls would like me. My freshman year of high school I hung out with my sister Kitty. I know now that I was really lucky that she let me eat lunch with her and all of her friends (they were cool kids). They were all very nice to me and would high five me in the hall, I felt normal. I found a few friends on my own who I thought were “normal”, one girl was named Vicki. She was also a freshman. One day in health class I put my foot in my mouth never really knowing what I said wrong. By the time lunch came that day we weren’t friends anymore. I did find out later that I repeated something she told me that I shouldn’t have but I couldn’t fix it. Most students who I was so wanted so much to know didn’t give me a chance. Sure, they might say hi in the hall but I always felt like I didn’t belong. Where were the party invitations, where were the kids who wanted to go to the mall with me?

This summer when I heard Jesse speak I finally understood what my mom and sister and brother had been telling me all these years. I am special not just “special ed.” which is the way I saw myself. Hearing Jesse’s experiences and stories made me see that I was fighting myself. I am not “special ed.” and I am normal. Jesse, my teacher had to learn so many things just like I did and he is normal and he has a great life. He showed me that we live in a world that sometimes isn’t always fair. The student in me had to learn how to accept that I am “special ed.” and that I have learning challenges but I can either overcome them or I can deny them and never learn to live with myself. That’s what is so cool about teachers, they can have a big impact on your life and not even know it.

When Jesse was in school it was hard for him with other kids and teachers and of course there were bullies just like it was hard for me. I don’t think anyone has not run into someone in life who is mean and hurtful, especially in high school. I realized I wasn’t alone. Jesse tells us that he is a teacher but he is also still a student in a way. Life gives everyone lessons and challenges. He said that one of his teachers taught him that the world is good. Jesse taught me the world is good and on bad days we just have to hold on.

I recently received Jesse’s book, Getting a Life with Asperger’s:  Lessons Learned on the Bumpy Road to Adulthood. I will read every last word. My favorite saying is that life is like a book and we write our own stories. People have to be willing to spend time with me to see who I am. Just like a book, if you don’t actually read it, you’ll never know if it’s any good. If you don’t get to know people but judge them because of their disability you may miss out on knowing a great person like me or Jesse. Jesse has helped me become more comfortable talking about my disability and accepting my challenges. He inspires me and makes me push myself to think about who I am and what I want in my life. Long after I am Jesse’s student I will always be thankful that I had him as a teacher. He has given me a gift that is changing my life. It’s the gift of accepting myself for who I am. Thank you Jesse for being my inspiration and for showing me that I can have a great life too.

Kudos to Emily and Jesse for their hard work, and for joining us on this great adventure. We are all students and teachers in The College Experience!